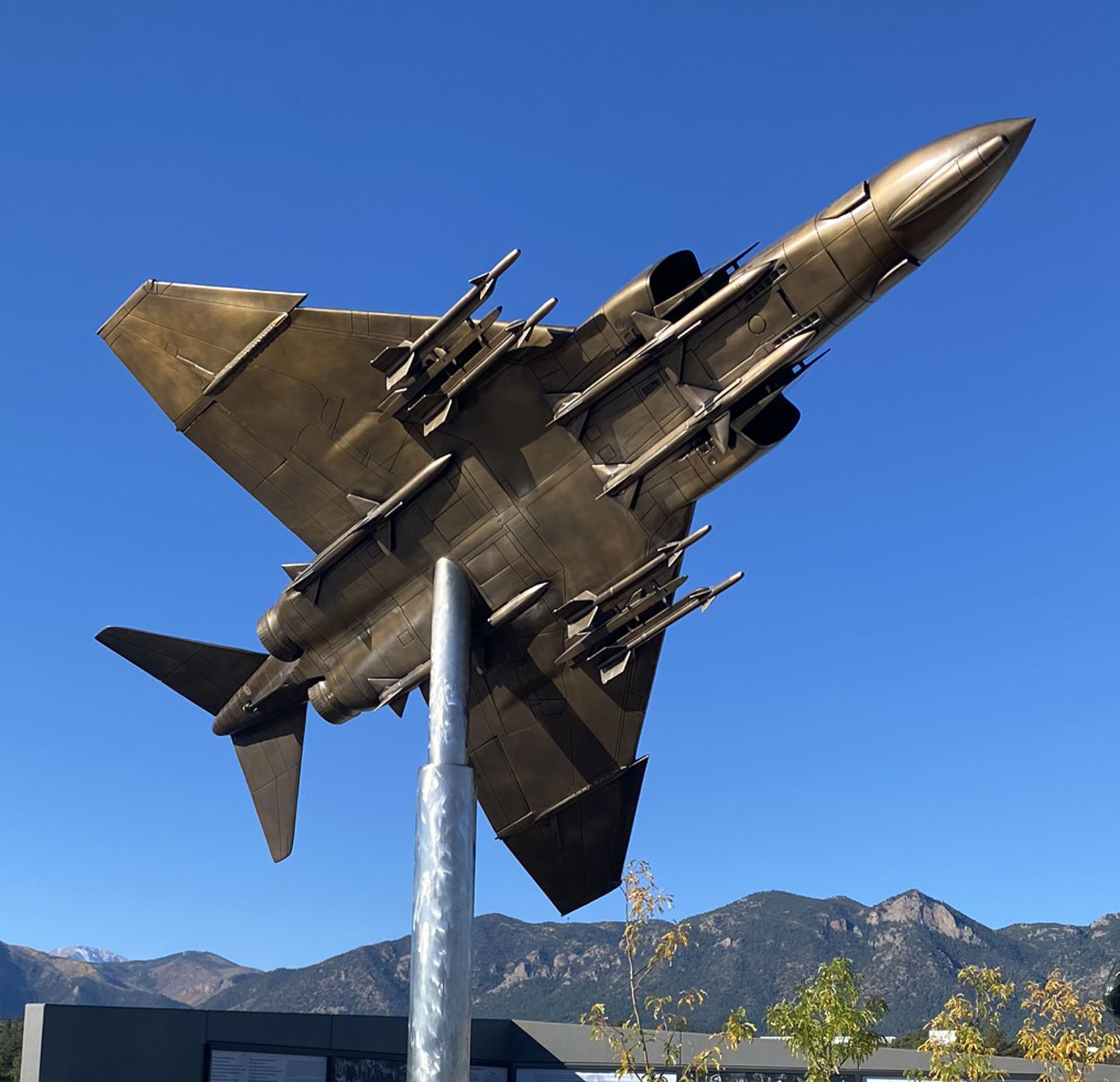 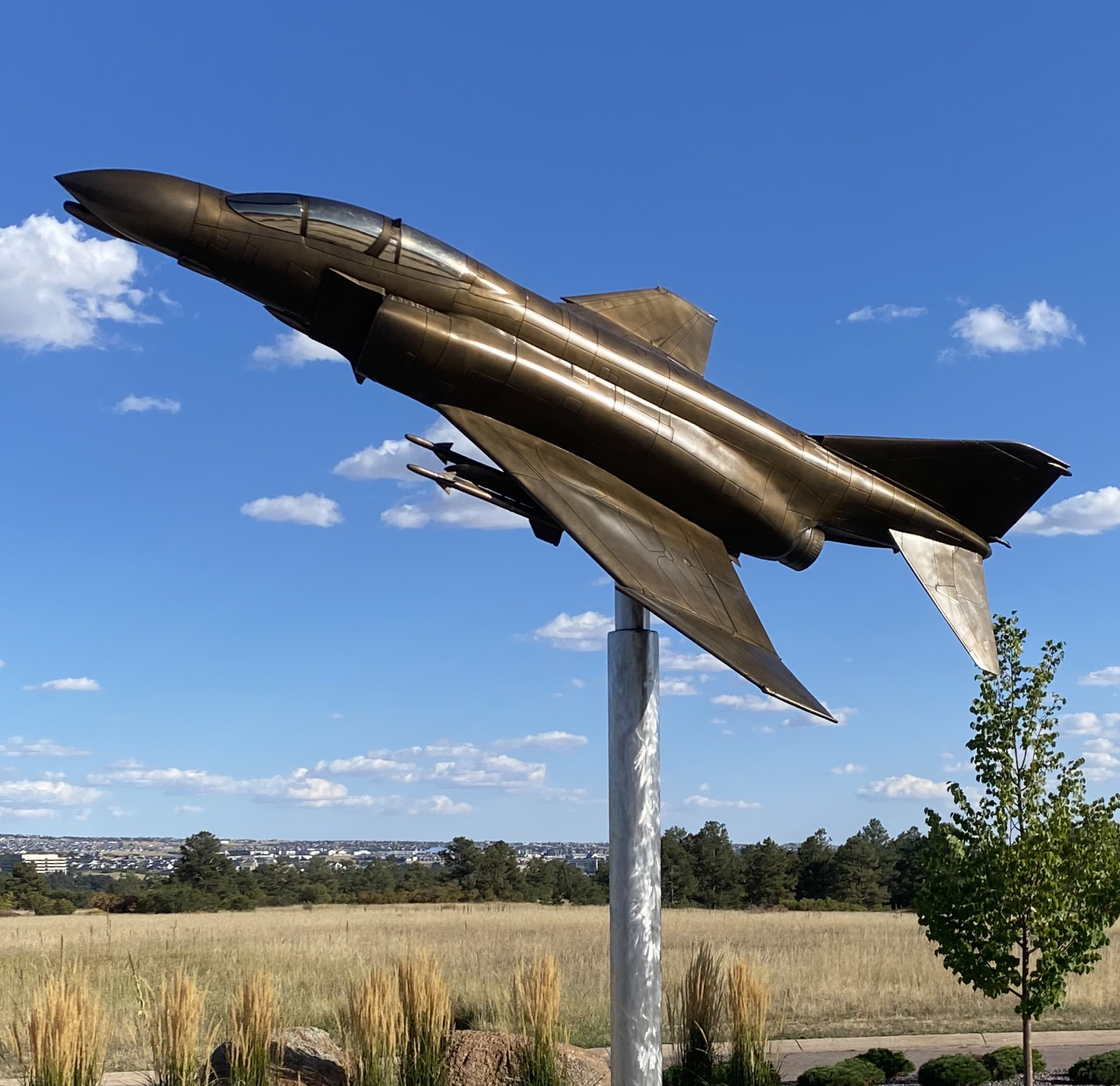 A large bronze F-4C is a component of the AWCM designed to represent all aircraft which have carried our American Airman into aerial combat. The F-4 was selected because it was an iconic workhorse of the Vietnam conflict as well as the same model aircraft flown by Robin Olds in Vietnam. The aircraft is mounted on a brushed stainless-steel pole 10 feet tall located in the center of the plaza behind and to the Northeast of the Robin Olds statue at a distance about 30 feet. As a visitor enters the memorial, the F-4 will be viewed level with Robin Olds’ shoulder and to his right side and visually complements the warrior image of Robin Olds.

Sculpting this aircraft required a year of effort referencing flight manuals, technical drawings and hundreds of images. The first step was to create an accurate model or maquette which measured 4 feet long. The maquette was then painstakingly refined by hand to ensure all the correct panel lines and flight controls were accurately depicted. Once that maquette was complete it was enlarged to the full size and re-sculpted. Finally, waxes were created and cast at the foundry in approximately 40 pieces.

The reassembly and welding of the F-4 was several times more difficult than a normal human figure. Bronze casting always creates some distortion in the metal as the molten bronze cools. Usually on an organic figure with clothing these distortions are very minor and not noticeable. However, on a mechanical surface like the flat wing of an aircraft these distortions become noticeable and extreme care must be taken in welding and finishing. Thanks to the experienced professionals at Bronze Services Foundry the end product turned out beautifully. 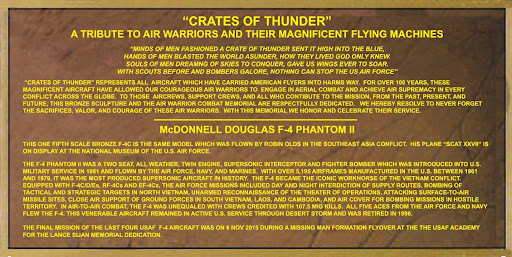 “Minds of men fashioned a crate of thunder sent it high into the blue,
Hands of men blasted the world asunder, how they lived god only knew.
Souls of men dreamng of skies to conquer, gave us wings ever to soar.
With scouts before and bombers galore, nothing can stop the us air force”

“Crates of thunder” represents all aircraft which have carried American flyers into harms way. For over 100 years, these magnificent aircraft have allowed our courageous air warriors to engage in aerial combat and achieve air supremacy in every conflict across the globe. To those aircrews, support crews, and all who contibute to the mission, from the past, present, and future, this bronze sculpture and the air warrior combat memorial are respectfully dedicated. We hereby resolve to never forget the sacrifices, valor, and courage of these air warriors. With this memorial we honor and celebrate their service.

McDONNELL DOUGLAS F-4 PHANTOM II
This one fifth scale bronze F-4C is the same model which was flown by Robin Olds in the southeast Asia conflict. His plane “Scat XXVII” is on display at the national museum of the U.S. Air Force.The F-4 phantom II was a two seat, all weather, twin engine, supersonic interceptor and fighter bomber which was introduced into U.S. military service in 1961 and flown by the Air Force, Navy, and Marines. With over 5,195 airframes manufactured in the U.S. between 1961 and 1979, it was the most produced supersonic aircraft in history. The F-4 became the iconic workhorse of the Vietnam conflict. Equipped with F-4C/D/Es, RF-4Cs and EF-4Cs, the Air Force missions included day and night interdiction of supply routes, bombing of tactical and strategic targets in north Vietnam, unarmed reconnaissance of the theater of operations, attacking surface-to-air missile sites, close air support of ground forces in south Vietnam, Laos, and Cambodia, and air cover for bombing missions in hostile territory. In air-to-air combat, the f-4 was unequaled with crews credited with 107.5 MIG kills. All five aces from the Air Force and Navy flew the F-4. This venerable aircraft remained in active U.S. service through Desert Storm and was retired in 1996.The final mission of the last four USAF F-4 aircraft was on 6 Nov 2015 during a missing man formation flyover at the USAF Academy for the Lance Sijan memorial dedication.