James J. Nance is a portrait sculptor who has for 35 years developed his artistic skills and reputation from studios in Minneapolis Minnesota and Loveland Colorado. His expressive and accurate portrait commissions in terra-cotta and bronze have received enthusiastic acclaim and have been acquired by both public and private collections. Institutional placements of his Lincoln project, “A Portrait of Transition: Prairie Lawyer and Immortal Conscience”, include the Lincoln-Herndon Law Office Illinois State Historic Site, Springfield Illinois; The Lincoln Home National Historic Site, Springfield, Illinois; and the Lincoln Museum, Ft. Wayne, Indiana; The University of Tennessee Knoxville College of Law.

Jim was born in Dallas and grew up in Tulsa, Oklahoma, where, inspired by his exposure to western artists such as Remington and Russell, he developed an early interest in painting and sculpture. However, his love for aviation led him first to a career as a pilot. After graduating from the United States Air Force Academy in Colorado Springs, Colorado in 1971, he served a five-year tour of duty as an Air Force pilot, including service in Viet Nam. Later, during the oil pipeline construction, Jim worked as a bush pilot in Alaska and then accepted a job with Hughes Air West Airlines. Several mergers later he ended up with Northwest Airlines where he was a senior international Captain before retiring early in 2007. The photo on the left is from his retirement flight with Mt St Helens and Mt Rainier in the background.

While living in Minneapolis with Northwest Airlines, Jim attended classes at the Minneapolis College of Art and Design and the Atelier Lack classical painting and drawing school. His art education was also complemented with an exhaustive study of human anatomy. Jim’s wife Jeanne claims that his motto is “anything worth doing is worth overdoing,” which he has vigorously applied to his study of art.

Jim has always felt that the human face is the window to the soul, so it isn’t surprising that he was naturally drawn to the field of portrait sculpture. His interests and talents however aren’t limited to portraiture; he has continued to develop his skill in figure sculpture and in 1989 won first place in the weeklong prestigious Johnston International Live Figure Sculpture competition, sponsored annually by the International Sculpture Center of Washington D.C. This achievement led to a “Artist in Residence” position at the Smithsonian National Gallery and a six month study grant at the Uffizi Museum in Florence Italy.

In 1994, while still flying for Northwest, Jim and his wife Jeanne, moved to Loveland Colorado, to establish a studio and take advantage of the thriving artistic climate and the proximity to several of America’s finest bronze art foundries. Due to the time limitations with his airline job, Jim concentrated his artistic efforts primarily on portraiture in busts, and to date he has completed over 125 busts.

In 2005, Northwest Airlines filed for bankruptcy; and after two challenging years, Jim accepted an early retirement in 2007. Seizing upon this opportunity to reinvent himself, he began developing a monumental sculpture business in Loveland. His first big break came in 2009 when the Air Force Academy commissioned him to create a large bronze relief map of Vietnam and Southeast Asia for a newly constructed Southeast Asia memorial pavilion. 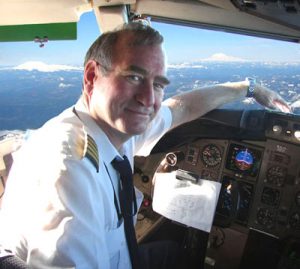 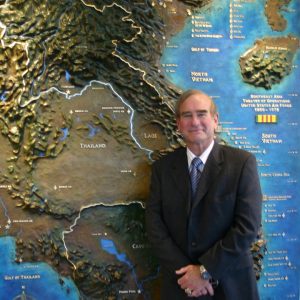 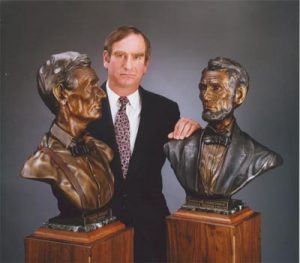 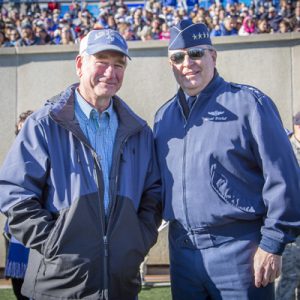 The success of this bronze map sculpture led to other commissions from the Academy and two major commissions from the Museum of flight in Seattle. In 2013 The Museum of Flight commissioned him to create a Vietnam Memorial. In 2014 he completed a large bas relief of an American POW in Vietnam and in 2015 completed a bronze memorial for Captain Lance Sijan, class of 65, who earned the Medal of Honor in Vietnam. His next project was an 8.5 foot “Returning Airman” for a new Vietnam Air War Memorial located at the Museum of flight and dedicated in 2019. In the fall of 2020 Jim completed a monumental figure of triple ace Robin Olds and in 2021 a large-scale bronze F-4 Phantom 2 jet fighter. Both were dedicated in the fall of 2021 for the new Air Warrior Combat Memorial located at the USAF Academy. He is currently engaged creating a large-scale bronze AC-130H gunship as a memorial to Spirit 03 which was lost in combat during Desert Storm.

For three years from 2018 to 2021 Jim served as a design consultant and figure sculptor for the National Desert Storm Memorial to be located in Washington DC next to the Lincoln Memorial. In addition to continuing his portrait work, Jim has also sculpted the Academy class crest each year since 2012 as well as over 70 large bronze plaques for the Southeast Asia Pavilion.

When not sculpting, James and Jeanne enjoy life serving their four dogs, Golden Retriever Beau, German Shepard Katie, Mini Schnauzer Kenzie, and Pug Miss Molly. Jim and Jeanne are also owned by three horses, Paints: Wilson, Gypsy, and Zoey.
Jim works from a studio at his home in Loveland. His close proximity to several bronze foundries and hundreds of support businesses places him in epicenter of a thriving sculpture culture. This abundance of community expertise and mutual support makes Jim feel confident that he could tackle any sculptural commission. He welcomes any prospective client to contact him to discuss a project.