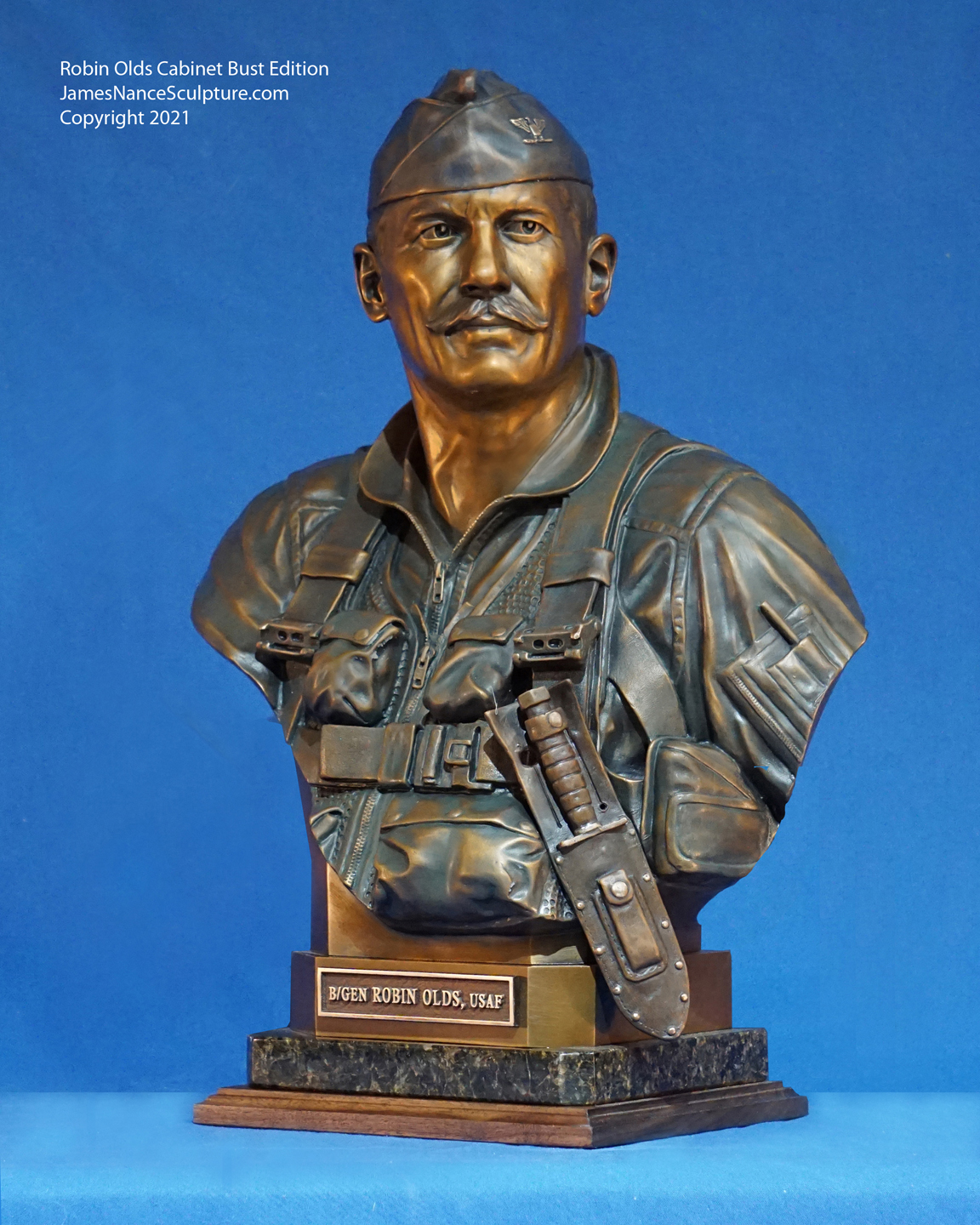 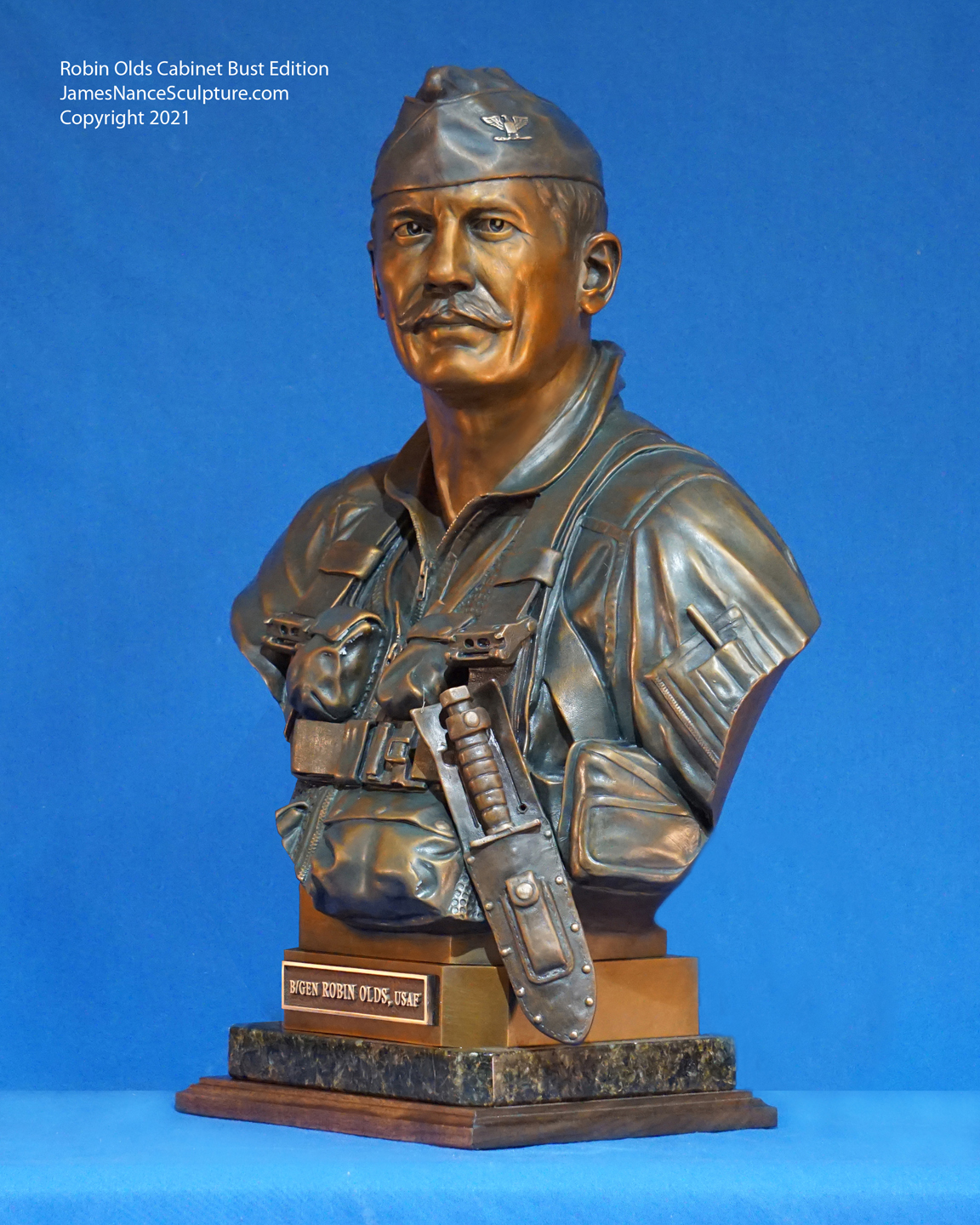 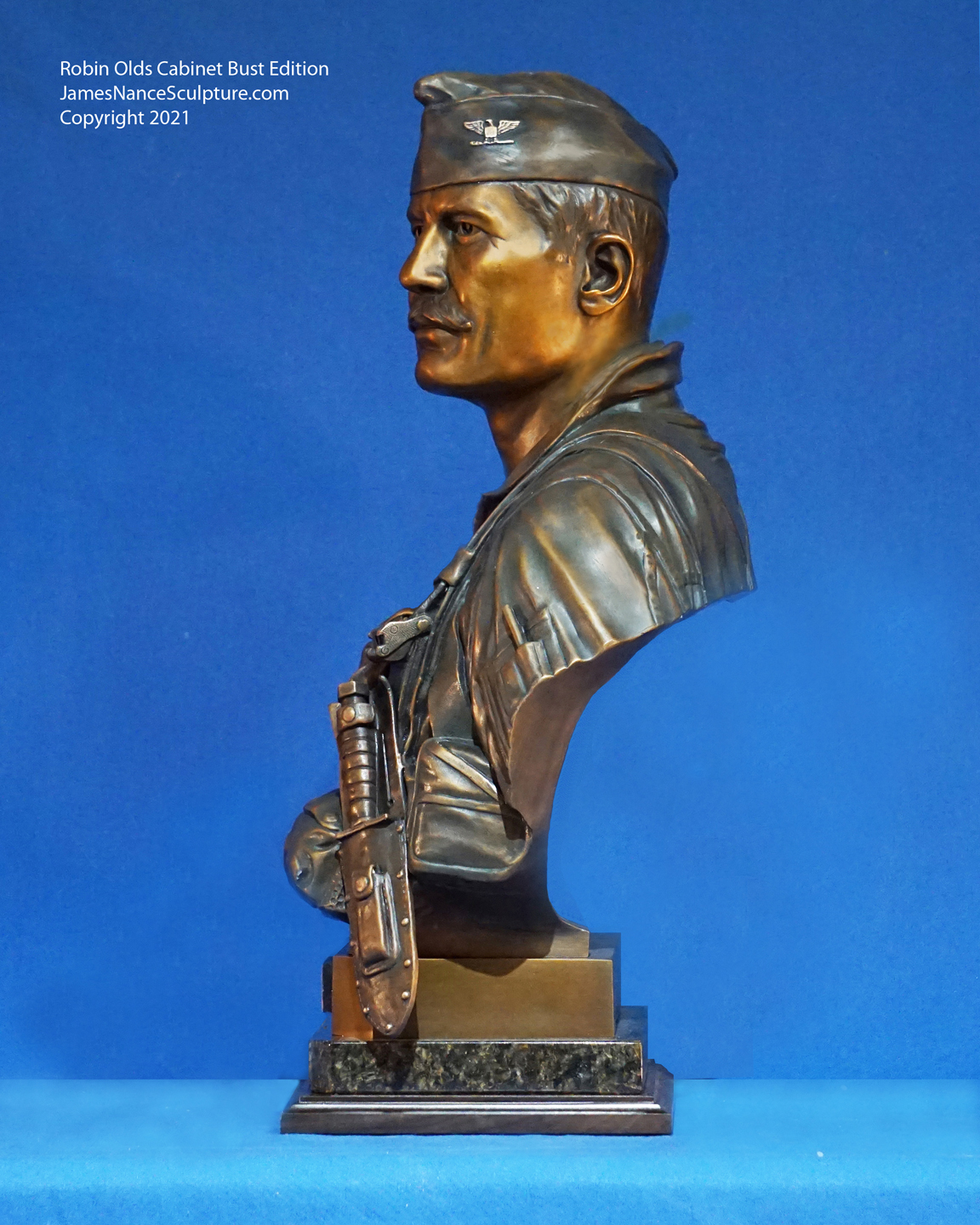 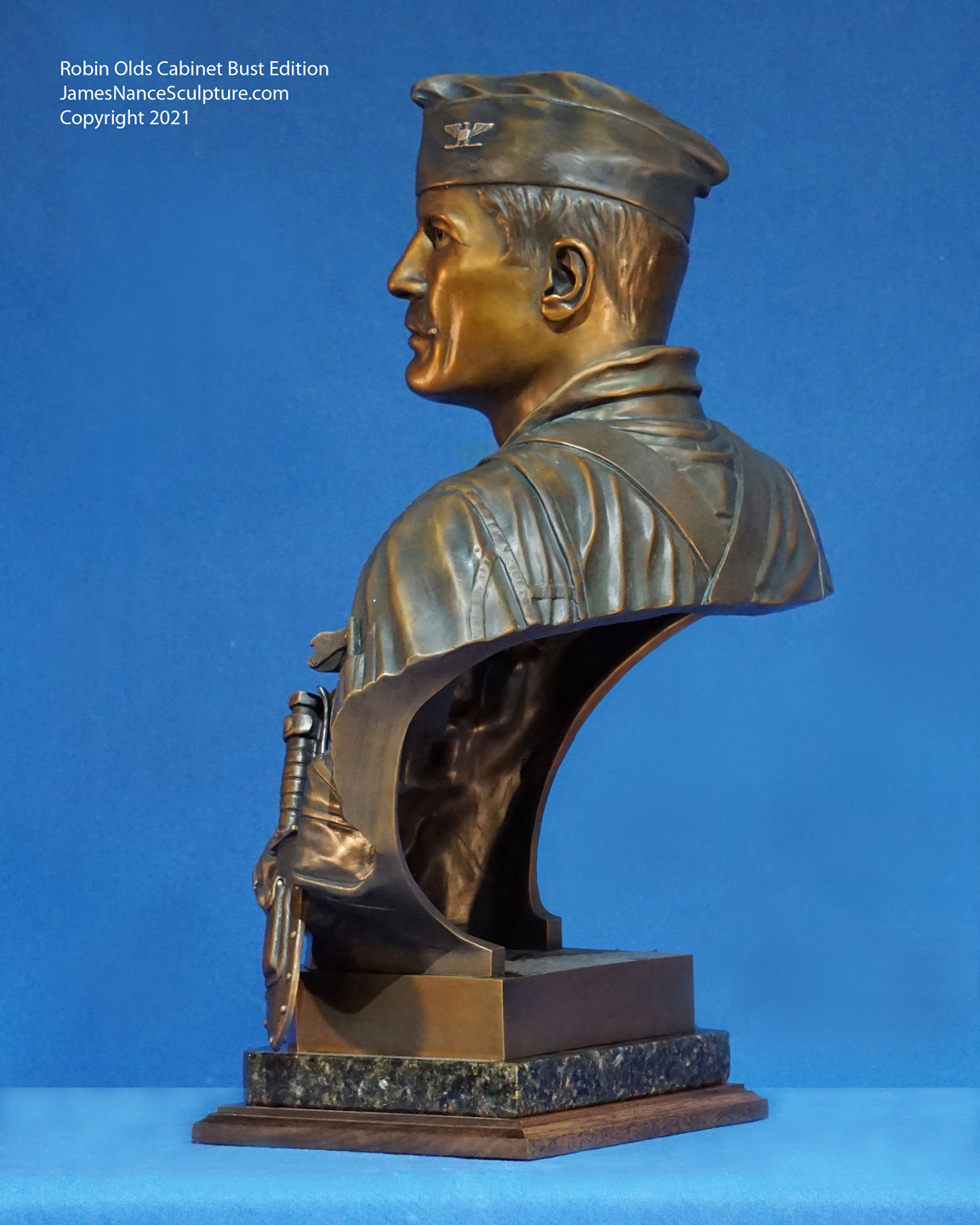 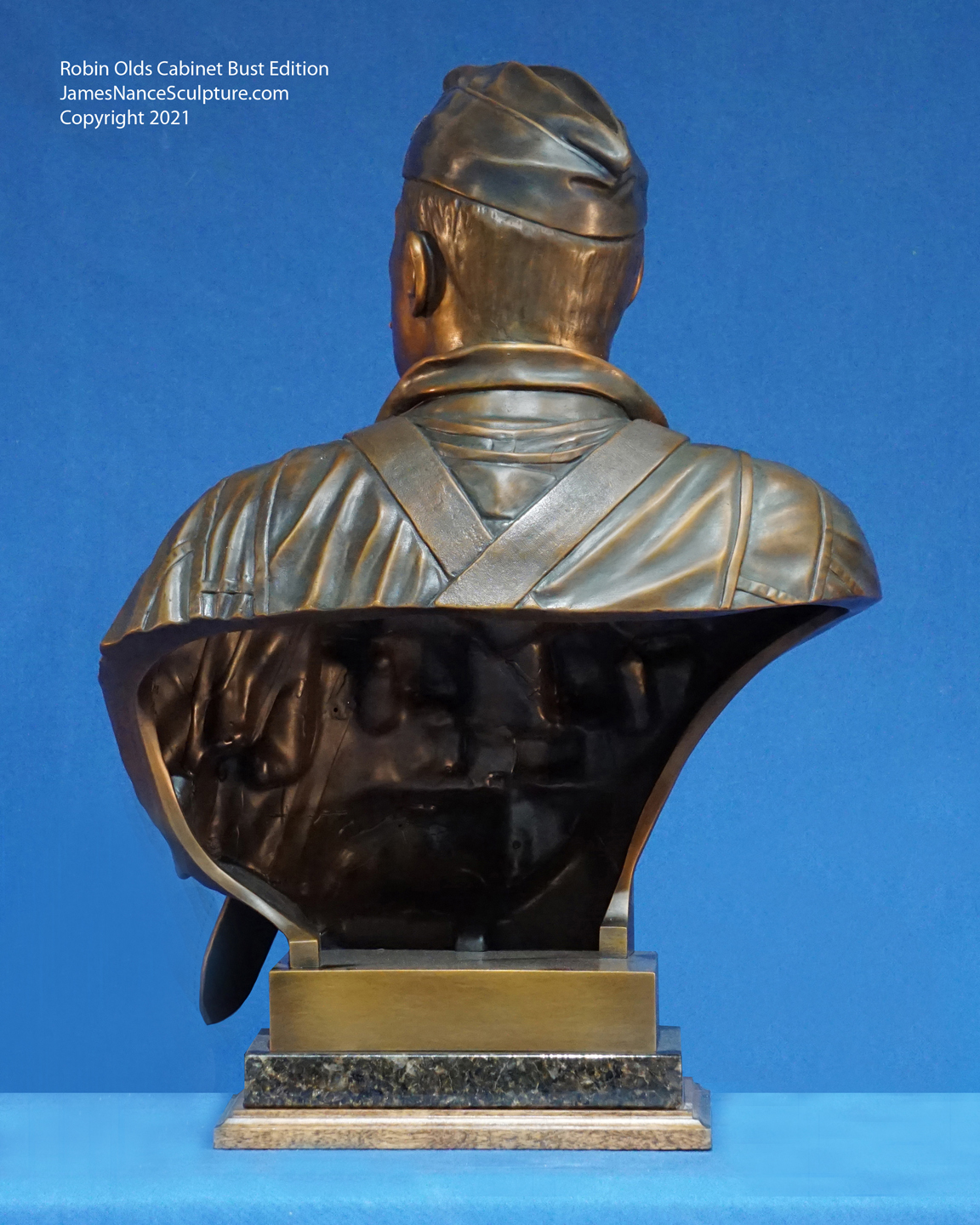 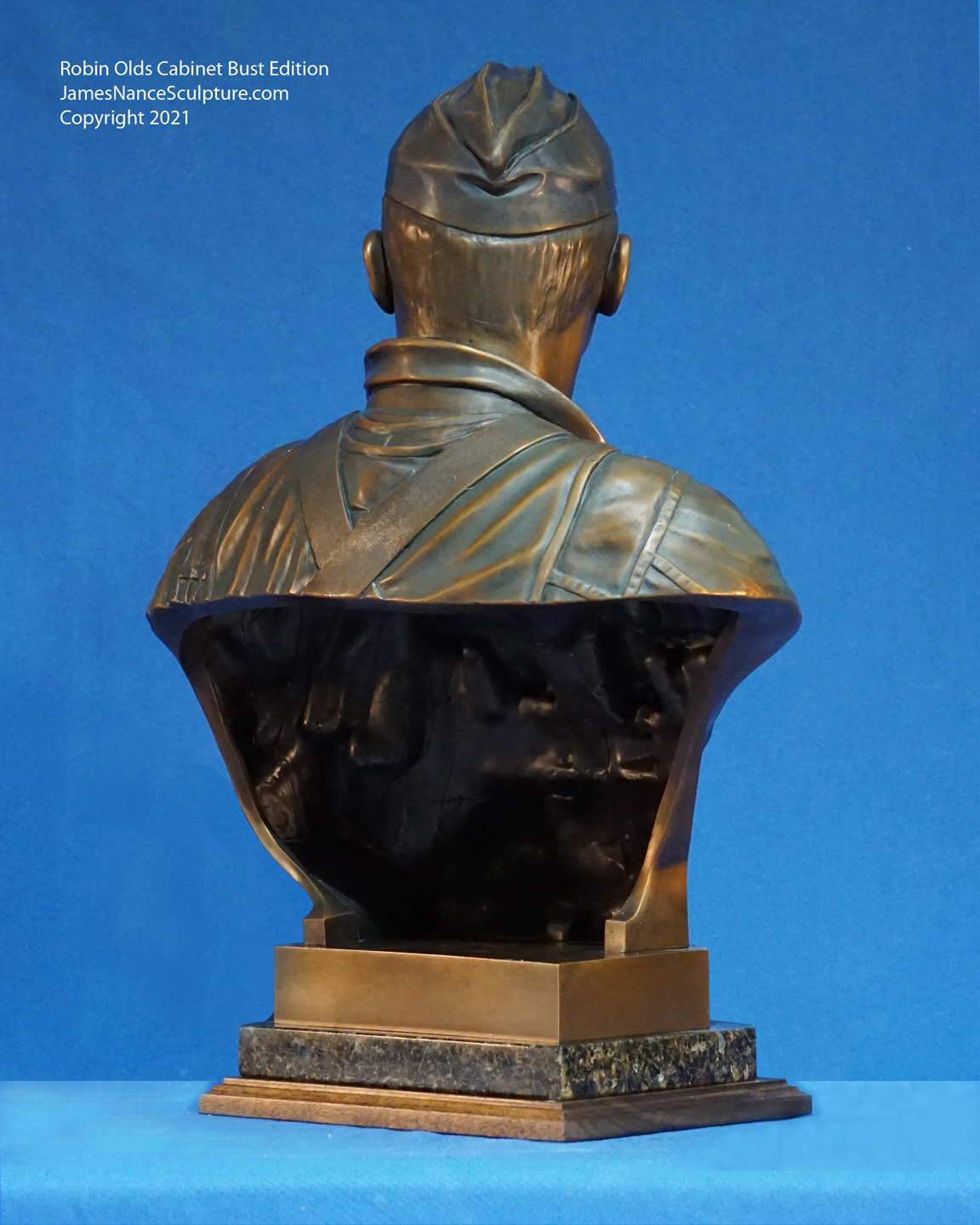 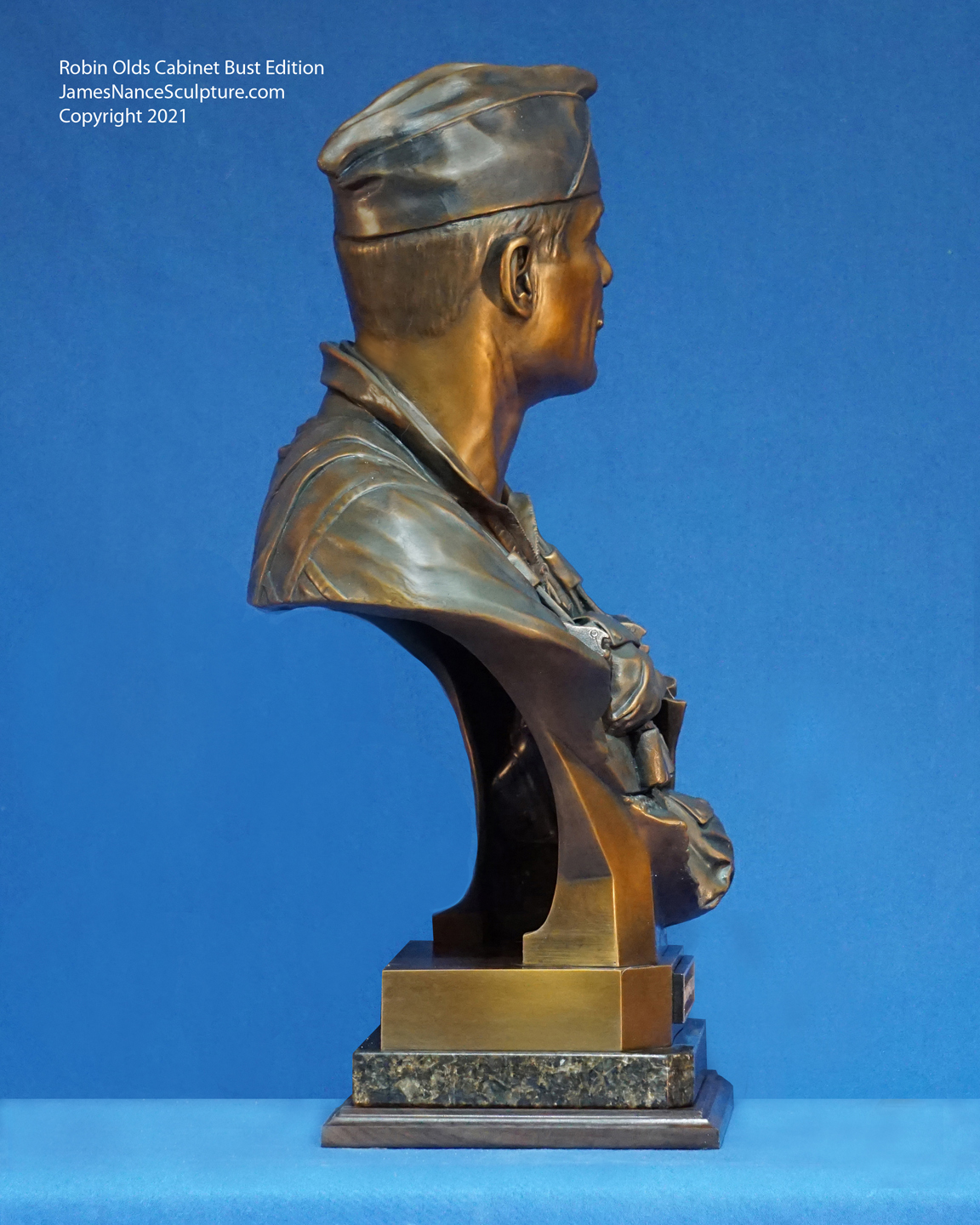 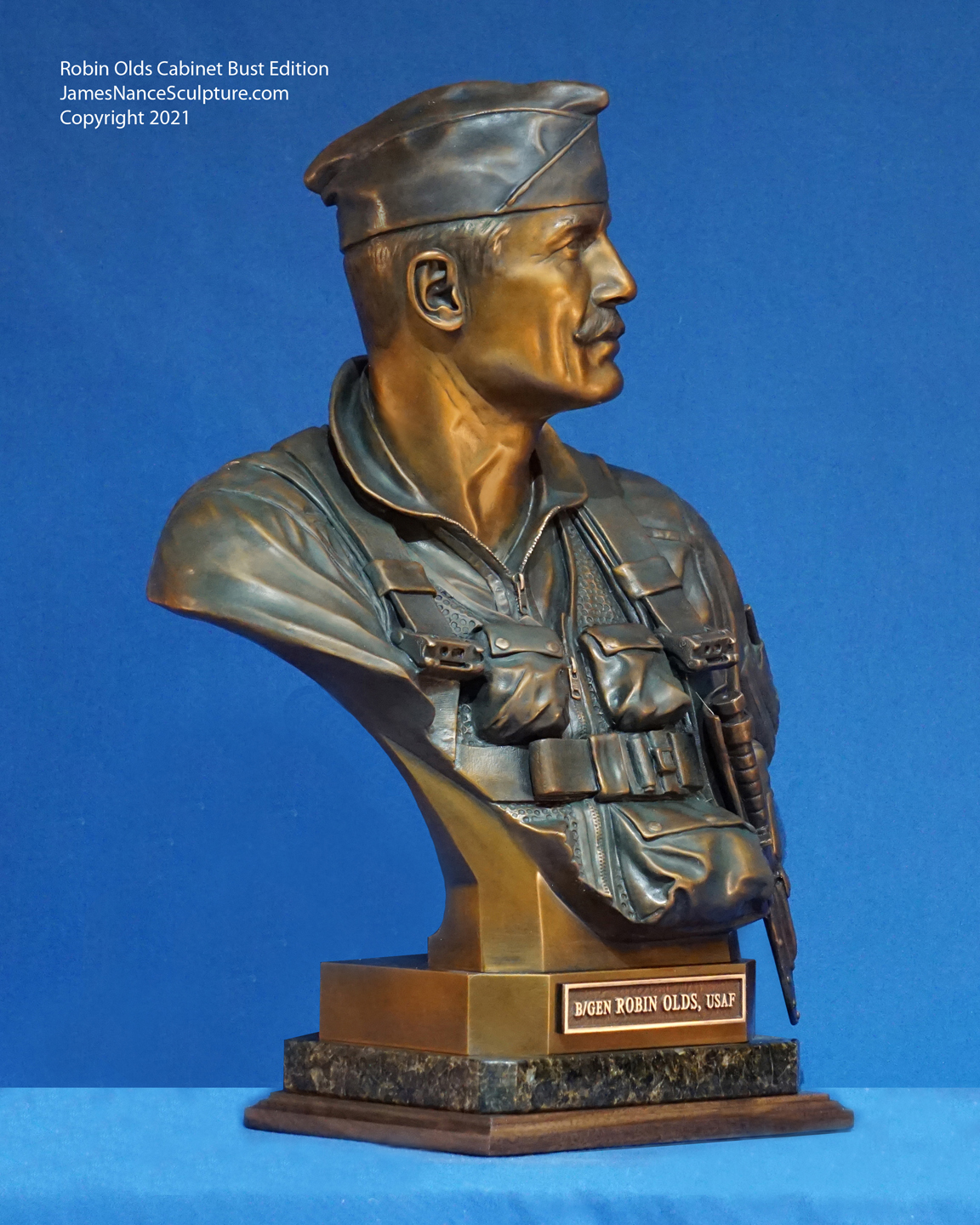 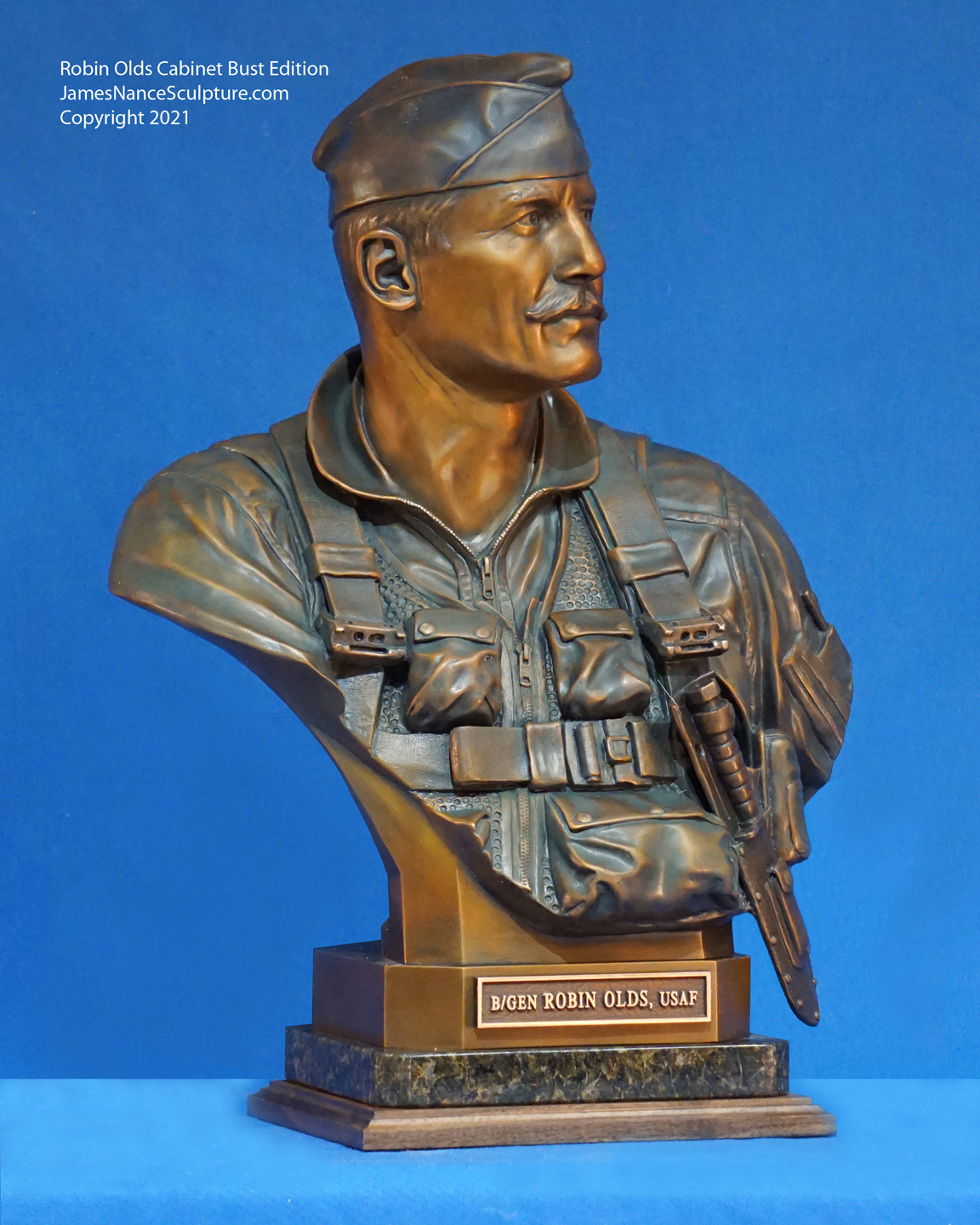 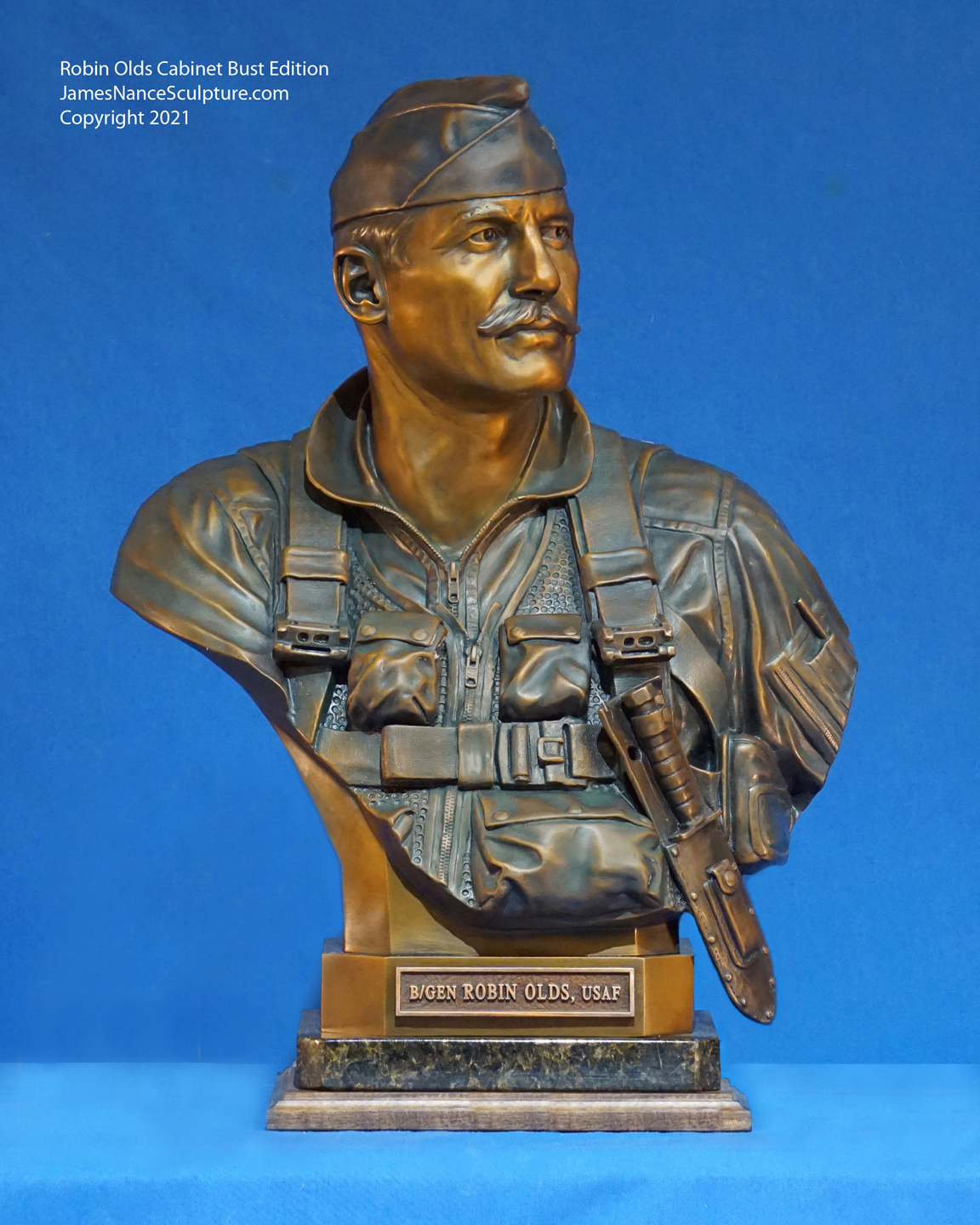 Thank you for visiting this web site. For the past ten years I have been blessed with the opportunity to create a monumental bronze figure portrait of my greatest personal hero Robin Olds. The project was sponsored as a class gift by my graduating class at the USAF Academy. As a class we overcame many obstacles and together with supporters from other classes, we guided the project, and sometimes watched with awe, as it took on a life of its own and evolved from a single statue to a major memorial, the Air Warrior Combat Memorial. The AWCM, located near the Academy North gate, celebrates and honors the first 100 years of air power with the Robin Olds statue anchoring the center of the plaza. The memorial was dedicated on 1 October 2021 at our 50th reunion.

During the years of memorial development and sculpting the Olds figure, I received many inquiries from grads and AF personnel about the possibility of a smaller collector version of the sculpture. To answer these requests, I have devoted almost 500 hours to creating a cabinet bust of Robin Olds. The bust is an original sculpture, based on the figure, with minor revisions to make it more compatible with a classical bust style. As a long time portrait artist, I am proud of this sculpture and humbly believe it represents my best work; it is my greatest hope that it does justice to the memory of General Olds. If it meets with your approval, I would be honored to cast one for you. 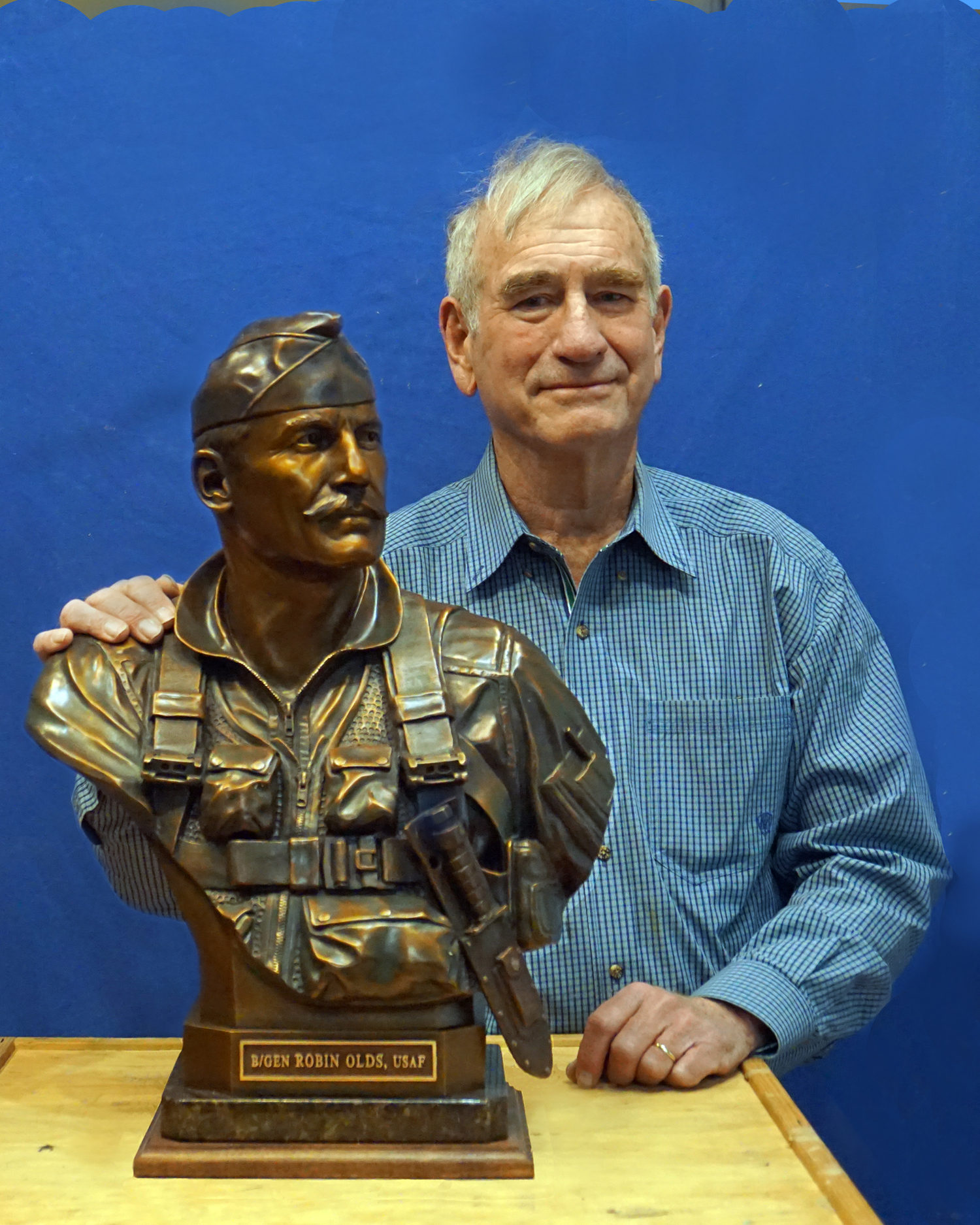 Custom Casting:
Due to the high production cost, which is approximately 2/3 of the price, this edition is offered only as a non-refundable “Custom Casting.” Upon receipt of your deposit, your individual casting number will be reserved and will begin production; please allow 3 to 4 months for delivery. you will receive periodic email updates on the progress of your casting.

The first step in creating this bust required a resculpt of the full-size Olds figure in a full size monumental bust form. This required decisions on what portions to include and what portions to cut to achieve a balanced and poised portrait presentation which is somewhat different from a figure pose. Some revisions were therefore necessary to the original pose. For example, while the head of the figure statue is tilted downward to compensate for the viewing angle, the chin of the bust needed to be raised slightly to a more traditional pose and to allow him to look directly at the viewer. Also, since viewing will be at a much closer range, all the flight gear was finished to a more refined level

In a traditional classical bust style, the arms were eliminated, and the chest retained down to below the left life preserver. The resulting asymmetric pose creates the impression of movement, reflected in the statue as Robin twists to his left to buckle his chute leg strap. The survival knife projects below the bust and serves an artistic exclamation mark to reinforce the warrior ethos. In classical style, the back is abbreviated below the shoulder and left open.

After the monumental bust was complete, it was then scaled down to the cabinet bust size. This required a full resculpt and hundreds of hours of careful work. My goal was to closely capture the large bust to maintain his unique character in the cabinet bust.

The base of granite and walnut was carefully designed to present the bust in the most impactful manner. The base is formed with geometric shapes reminiscent of an aircraft and to serve as a counterpoint to the organic forms of the bust. Finally, the nameplate is a raised letter cast bronze plaque which gives a much more powerful and respectful statement than an engraved plaque.

In creating this edition it was important to find a perfect size. Too small, minimizes his legacy and makes it difficult to capture the nuances of his character. To large it becomes too costly and too unwieldy. The 2/3 scale is a traditional “Cabinet Bust” size which was very popular before photographs were invented. In those days a client would commission a full size portrait bust and then ask the artist to produce a number of “Cabinet Busts” to give to friends and family. It is the perfect size to fit in an office or home study and to authentically capture his likeness, character, and flight gear.

If one were to take a one-foot square and double both sides the resulting square would be 4 times larger by area. Likewise, a one-foot cube doubled in all three dimensions would result in a cube 8 times more volume. So, in any three-dimensional sculpture a doubling of scale results in an increase in volume of 800%. Therefore, a 12-foot-tall figure has 800% more volume than a 6-foot figure. An 8-foot figure has 200% more volume than a 6-foot-tall figure; small increases in scale results in significant volume increases. For a cabinet bust, a 2/3 scale will have around 40% of the volume of a life-sized head, which is perfect for an office or home display.

To me, as a portrait artist, I consider the only true material for castings is bronze. It has a long tradition of expression and its appearance, weight, and feel create a powerful, permanent statement. This is especially true for a epic warrior like Robin Olds; his memory deserves power, strength, and longevity. He was a man of steel or in this case bronze. It is my strong opinion that castings in plaster or resin cheapen a work and reduces the subject’s contribution to a gift shop souvenir such as a plaster Mozart on top of a student’s piano.

Any time an edition is released, the question will inevitably arise concerning the edition number; is it too large or too small. This is a critical decision since each edition has its own unique characteristics and demographic market. For the Olds bust, the scale and bronze material creates a high production cost, so a purchase represents a significant investment. In order to maintain the collector’s investment, a reasonable limit to the edition is essential to protect the resale value of the investment. With all these factors considered, I believe that a limit of 100 is optimal for this bust.

The finish or patina of the bust is a modern variation on a traditional style. When the bronze is completed in metal it is sandblasted to clean the surface and prepare it for patina. The first step is to heat the surface with a blow torch and apply a “Liver of Sulfur” chemical which tarnishes the surface black. The black is then mostly rubbed out with depressions retaining various degrees of the black, which gives the surface a greenish antique base and a more 3-dimensional look.

Next it is again heated and “Ferric Nitrate” is sprayed with delicacy to give the surface a golden hue. Finally, again with a blow torch, a thin mixture of acrylic paint is sprayed and again rubbed out to a desired effect. For this bust I wanted to have green for his flight suit and a blue for the hat, but very, very subtle to maintain the classical feel. To achieve just a hint of color, we rubbed back the color to reveal the bronze underneath. The final quality of the patina is directly related to the skill and technique of the application. It is a demanding art form and Bronze Services foundry has several world-renowned experts in this discipline. Finally, the surface is sealed with a clear lacquer and a layer of paste wax is applied.

Uniqueness of each bronze casting in an edition: +

Although each number of an edition originates from the artist’s hand in the original clay and in wax from the same mold, there are hundreds of steps during production process by dozens of specialists into which small variations will occur. This will result in the final castings each having its own unique persona. To the casual observer, they will all look alike, but if you closely examine two castings side by side there are small differences both in the metal and patina finish. This is normal and represents the nature of bronze castings; it creates uniqueness in each number which is highly revered by art collectors. As the edition is cast the artist must supervise and frequently inspect each casting to ensure quality and consistency.

Effects of lighting on display: +

The attached images represent a true and accurate capture of the proof’s patina and finish. Color has not been digitally altered. However, it is important to note that these images were taken in a studio under photographic flood lights, which make the patina and forms appear bright and well defined. Bronze patina has the characteristic that its visual impact varies depending on the environment and light source. If you were to display your casting outside in full sunlight or inside under a bright spotlight then it will closely resemble the photographs. However, if it is displayed in a dark unlit corner of your office, the surface will appear much darker than the photos. No matter how it is displayed a bronze will posses an elegant and sophisticated presence.

Typically, a bronze piece offered in a fine art gallery is marked at 300% of the cost for production. In this manner one third goes to production, one third to the gallery, and one third to the artist. Using this formula, if this Robin Olds bust, or a similar sized bronze was offered in a gallery, it would sell for around $13,000. I believe that is too much for this project, so to keep the price reasonable, it is offered direct from the artist as a “custom” cast with a minimal markup; the price of $6,750 is about half of a typical gallery price.

Clean with a soft dry cloth. Do not use any cleanser product. To preserve the finish, once a year, use a soft paint brush and apply a good quality furniture paste wax. Allow to dry a few hours and softly buff. Your casting will stay in pristine condition for at least 3,000 years…unless your home is sacked by barbarians.

When I first saw Jim Nance’s stunning 7′ bronze likeness of Robin Olds, it seemed my father was standing right in front of me about to speak.  It’s impossible to describe my overwhelming emotion and gratitude for this grandest of all tributes to this good man, the fighter pilot, the leader, and all-around wonderful dad. My daughter Jenny had the same reaction. On the day the statue was unveiled at the U.S. Air Force Academy we stood silently in front of it with our arms around each other and gazed up at him. In our lives, he was always larger than life. Now he really is.

For years since my father’s passing, I’ve felt the comfort of his face and presence through photographs. But now it’s as if he’s right here with me at home in this bust-sized bronze. Each day I’m able to greet him with a hand on his shoulder and a happy “Hi Daddy!” There aren’t adequate words to compliment the incredible job Jim did in creating this perfect representation. The attention to detail is something I’ve never seen in any other bronze. It exactly captures his determined gaze, his alert stance, his commitment to that day’s mission, and his concern for his aircrews. More than anything, the permanence of this exquisite sculpture assures me that Robin Olds’s legacy will carry on far into the future, as it should.