Museum of Flight, Seattle
Dedicated on 25 May 2019

“Project welcome home” was conceived by a group of Military veterans from all services who flew in the Vietnam war. The 3 million dollar memorial sponsored by the Museum of Flight is located on an large site, alongside the river, next to the Museum on Boeing field in Seattle. It consists of plazas, sidewalks, walls, plaques, and an actual restored B-52 mounted on an elevated stand. In addition, the memorial features an 8 ft 6 inch tall bronze statue of a “returning airman” created by sculptor James Nance. All funding was donated by the generosity of the local community.

The “returning airman” sculpture represents all services and all missions and was cast in bronze at the foundry in Loveland Colorado, Bronze Services. Installation occurred in early May of 2019.

The composition depicts a young Captain symbolically returning home. He is tired from his year long deployment, reflective on his experiences, proud of his contribution, sad for the loss of comrades in combat, yet looking forward to his return to America, family and loved ones. In his left hand he holds a flight helmet and in his right hand, pressed firmly against his chest, is a folded American flag. The folded flag is a symbolic gesture of honor for those who did not return home and is modeled from a standard casket flag presented to families of those lost at war.

Nance believes that even a generic figure should have the sensitivity of a portrait, so he used an actual model for the project, a cadet at the AF Academy. Nance believes that the model’s youth, energy, and idealism shines through the clay and bronze to create a believable and sensitive “returning airman.”

When the Museum awarded Nance the contract in June of 2017 he first sculpted a nude 40 inch maquette in order to establish a suitable pose and correct anatomy. Next after approval from the committee and museum, Jim sculpted the clothing and flight gear on the maquette. Finally, the 40 inch maquette was painstakingly enlarged by hand with clay over a foam and steel armature to the full size of 8 feet 6 inches. The full-size sculpture required 1,000 of work. Once final approval was received, the clay was cut apart and molded in 40 different molds. After casting at the foundry, the parts were carefully welded back together under the direct supervision of the artist. After the monumental bronze figure was installed at the memorial, the bronze maquette was auctioned off by the organizers and donated to the University of Washington. 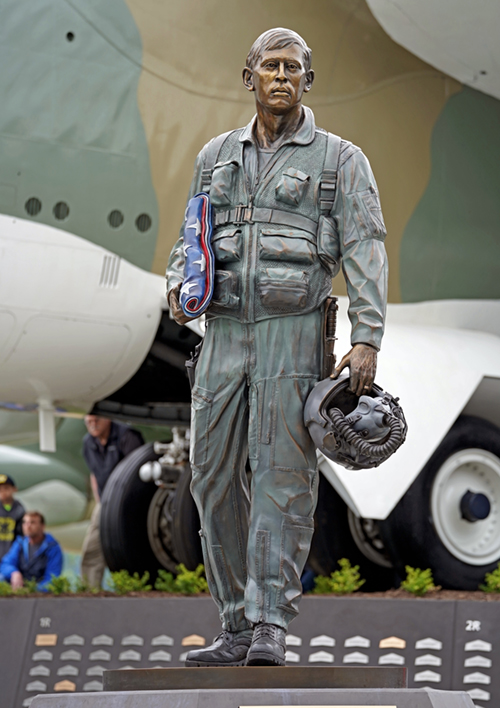 Selected photos of the “Returning Airman” created for the Museum of Flight Vietnam Air War Memorial. More photos of complete bronze will be added soon.